November 13, 2018
I spent three weekend afternoons to tear down the bathroom and to clean up the debris. It was nice to have an extra day-off (Veterans Day 2018). I was able to work on the project at a comfortable speed. I am getting old and do not perform well when I rush myself. All in all, I took up the do-it-yourself remodeling project to learn new things and enjoy the process for the most part.

So the biggest hurdle so far was to remove the near 300 lbs bathtub by myself. I managed to cut the tub into 8 manageable pieces. I was right assuming that it was made of steel, not cast iron or galvanized steel. The cross section of the cut surface showed shiny metal gloss, indicating the bathtub was made of steel. 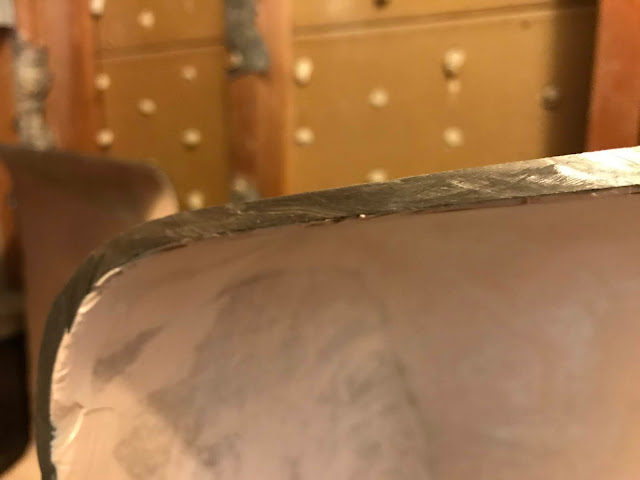 Once the bathtub was cut into eight pieces, it was easy light enough to move it out of the bathroom by myself. I wondered if anyone driving by my house would be interested in scrap metals to make some cash money by recycling. I took the cut pieces of steel bathtub out and left them on the curbside of my house. Well, to my surprise, all of them were gone in less then 2 hours. Someone spotted them and took every piece swiftly! 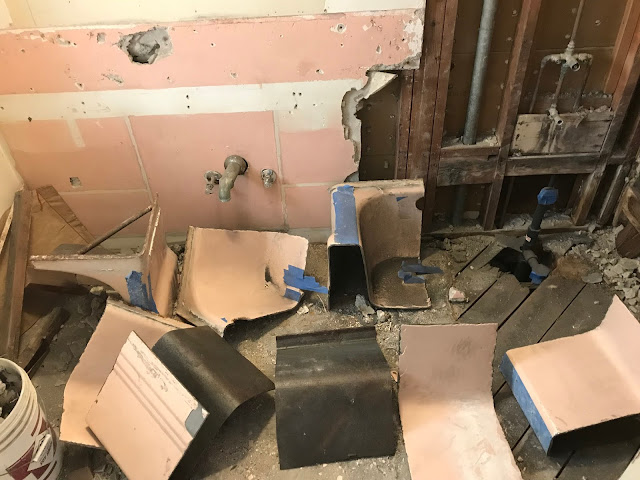 Afterwards, I came back to the bathroom and removed the rest of the wall from where the old tiles ended to the ceiling. It took another 3 hours to remove all rock laths and underlying drywalls, remove all drywall nails and get rid of all debris. Previous owner did not really use much of waterproofing materials other than the a total of 3 inch mortar underneath wall tiles and combination of drywall and rock lath for the wall above where the wall tiles ended. Maybe back in the days (I am thinking this bathroom was finished late 1950's or early 1960's because the steel bathtub has engraving of production year of 1958), there was not much interest in bathroom wall tile waterproofing system.

I realized the bottom corner areas had the most water damage. Some of the bottom area of vertical studs did not have much integrity or shape left in them. Pretty much rotted away due to many many years of gradual seepage of condensed water vapor or leaked water from the showing activities in the bathtub. In fact, I was relieved to see minor degree of water damage to the in-the-wall studs knowing that this bathtub was built 50 to 60 years ago.

Toward the end of the Veterans Day 2018, I spent the last hours cleaning up the bathroom. Pictures below are what it looks like now. I am going to test each stud's integrity and reinforce or partially replace them with fresh materials. There are some walls to be patched, too, because of the extra damage that occurred during tile demolition. The door needs to be removed and replaced with a new one including the frame. But the next immediate plan after wall repair is to shim the exposed studs to prepare fo drywalls. It will take some time to check and add shims for the levelness of all underlying studs. For decent tile walls, this is a must, though. 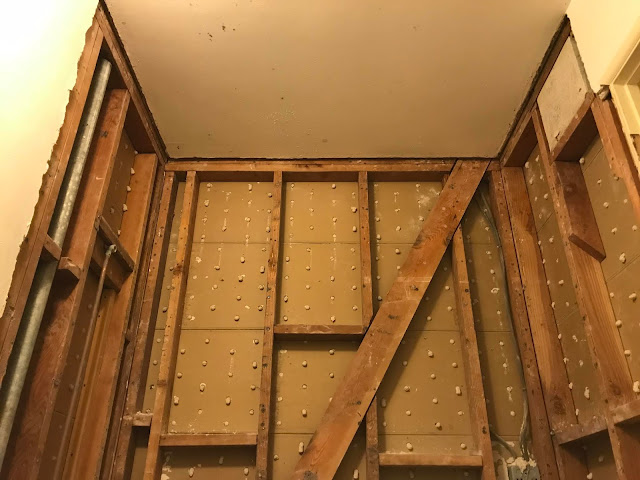 The small while circles are dried rock lath through underlying drywall on the other side of the wall. They used to make holes in the drywall and lay rock lath on top of it. As rock lath moves into the holes and gets dried, it created extra strong bonding to the drywall. 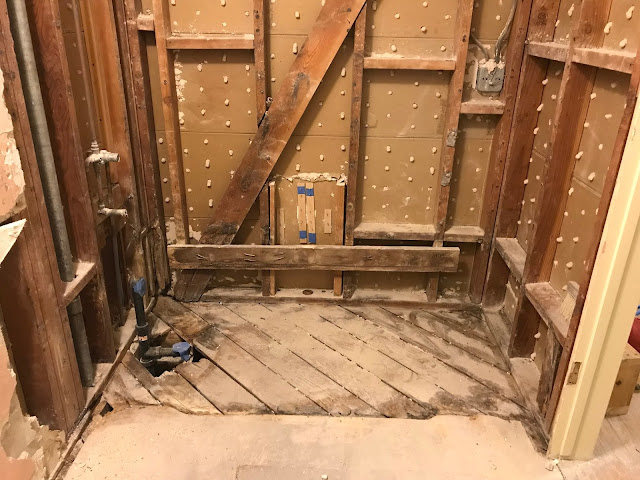 (The left bottom corner area received the most water damage) 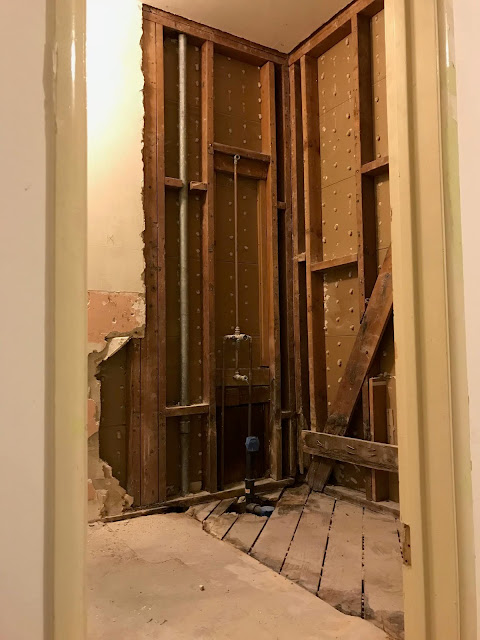 Bathroom tiles will cover all the way up to the ceiling

Popular posts from this blog

November 11, 2018
I have been busy on the weekends since last week. I've spent four weekend afternoons so far to gut everything there is in one of the bathrooms except for the Windows. I still need a couple more afternoons to finish up the stripping and doing minor repairs (water-damaged floor board, etc). The house was build in around 1954 or so. There were two unexpected challenges while demo'ing the bathroom. One was that the three sides of wall underneath the bathtub tiles were about 3-inch thick motor + cement with chicken wire. The other surprise was that the bathtub itself weighed tons, because it was made of galvanized steel (or steel). I posted some photos showing the wall demo and the bathtub removal. The bathtub was so heavy like at least 250 pounds, I had to use an angle grinder with metal blade to cut it into four manageable pieces. Yes, that was a lot of work, too. It was smart thing to protect myself with 3M respirator, ear plugs and a pair of eye goggles. This photo was
10 comments
Read more

June 24, 2018
The author has finished a really awesome hardwood floor refinish project pretty much all by herself. I am so inspired and motivated by this blog author's success. I have similar problems and plans for my own home's hardwood floor. This blog article gave me some good directions and expectations in realistic sense on what a home owner can do. http://mominmusiccity.com/happens-dont-listen-folks-lowes/
11 comments
Read more